Monica Lira-Cantu received her PhD in Chemistry (Materials Science) in 1997, from 1999-2001 she worked as permanent research scientist at ExxonMobil Research & Engineering (U.S.A.). Her work in the area of Photovoltaics stability/degradation initiated in 2004 during a scientific stay with Prof. Frederik Krebs at DTU in Denmark, where she worked on the long-term stability of polymer/oxide solar cells. She has been visiting scientist with Prof. Truls Norby at UNorway (2003) and with Prof. Shozo Yanagida at CAST in Japan (2006). She is currently Group Leader of the Nanostructured Materials for Photovoltaic Energy Group at the Catalan Institute of Nanoscience and Nanotechnology (ICN2) in Barcelona (Spain).

Moritz Riede is Associate Professor for Soft Functional Nanomaterials in the Department of Physics at the University of Oxford, UK. Before moving to Oxford in 2013, he worked in Germany at the Fraunhofer Institute for Solar Energy Systems ISE and the University of Freiburg as PhD student, and at the Institut für Angewandte Photophysik (IAPP) of Technische Universität Dresden as post-doctoral research and head of a junior research group. His academic research focusses on vacuum deposited organic solar cells, an emerging solar cell technology that has potential for light-weight, cheap, flexible, large area, long-living and efficient solar cells. 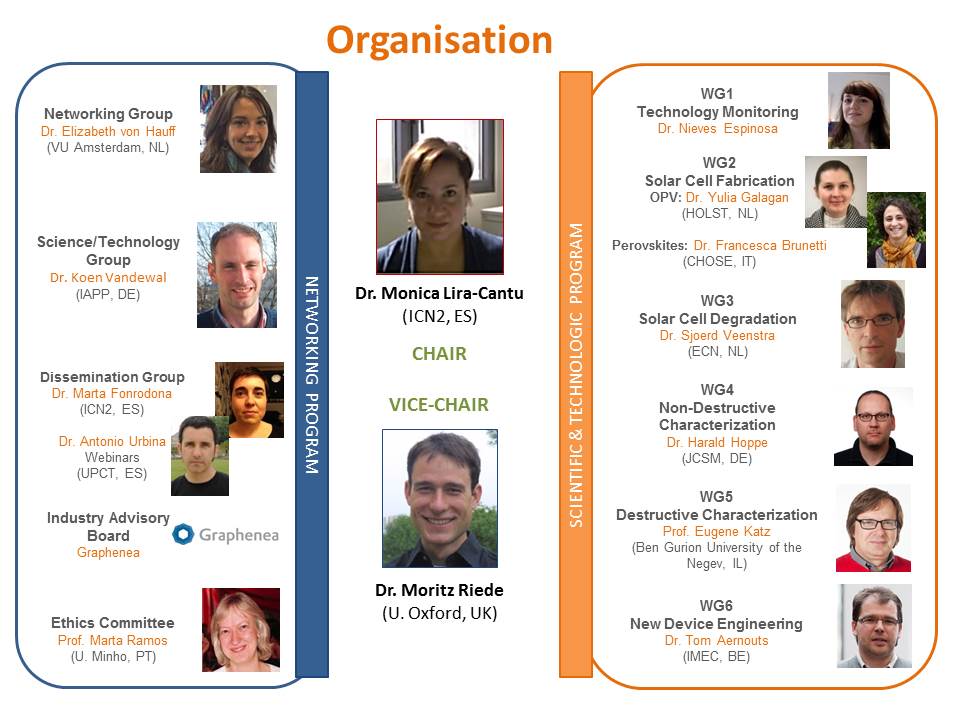 Nieves obtained her PhD at Universidad Politécnica de Cartagena in 2012 and since then she is a postdoctoral fellow at Technical University of Denmark (DTU). Nieves’ research is at the crossroad of the development of innovative design methodologies and the application of evaluation tools such as environmental life cycle analysis. In the field of OPV, her focus is on energy product development with sustainable criteria: energy-efficient system integration, environmental aspects, ecotoxicity, building integration of photovoltaics, manufacturability and costs.

Yulia Galagan is a senior scientist at Holst Centre (TNO department for flexible organic electronics) and Solliance (a partnership of R&D organizations from the Netherlands, Belgium and Germany working in thin film photovoltaic solar energy). She received her PhD in chemistry in 2002 from Kiev University. She was post-doctoral researcher at National Taiwan University, and in 2008 she joined Holst Centre. Her research interests are focused on organic electronics. Currently she is responsible for the development of manufacturing technology for Roll-to-Roll processing of organic and perovskite photovoltaics.

Sjoerd Veenstra studied Polymer Chemistry at the University of Groningen, where he graduated in 1997. In 2002 he received his PhD with a thesis titled ‘On the Electronic structure of molecular systems’. Sjoerd stayed at UCSB as intern (1997) and at Cornell as visiting scientist (2004). Since 2002 he works as researcher, and currently as team lead, in the area of hybrid organic / inorganic based photovoltaic devices (HOPV) at the Energy Research Centre of the Netherlands (ECN). The development of thin film solar cells of ECN, including polymer and perovskite based solar cells, is now carried out within the framework of the Solliance initiative, a regional research alliance of Forschungszentrum Jülich, Holst Centre, imec, TNO, Eindhoven university of Technology, University Hasselt, Delft University of Technology and ECN. Since 2008 Sjoerd is guest lecturer at the University of Groningen.

Harald Hoppe obtained a diploma degree in Physics at the University of Konstanz (Germany) in 2000. He conducted his first scientific studies at the Weizmann Institute of Science, Department of Materials and Interfaces (Rehovot, Israel) under the supervision of Prof. Jacob Klein. He completed his PhD in Physical Chemistry by revealing of the nanoscale morphology present within polymer-fullerene bulk heterojunction solar cells and its implications on device properties in 2004 under the supervision of Prof. N. Serdar Sariciftci at the Johannes Kepler University of Linz at the Linz Institute for Organic Solar Cells (Linz, Austria). He returned to Germany in 2005, by starting a research group on polymer solar cells at the Technische Universität Ilmenau and completed his habilitation in 2015.
During the last years he has led and conducted fundamental and applied research in the frame of several projects based and co-based at TU Ilmenau. His current fields of expertise cover fundamental structure-property-relations with respect to solution processed organic semiconductors, upscaling of solar cells to modules, optical modelling of photovoltaic devices as well as investigation of OPV degradation and their constructive stabilization for improved operational device lifetimes. One strong current focus is on the application of imaging-based advanced qualitative and quantitative characterization of photovoltaic devices. He has supervised the completion of ~10 diploma and master thesis, and co-supervised about 7 PhD-thesis. Harald Hoppe has published about 100 peer reviewed papers and more than 5 book chapters and is currently leading a junior research group named “AIMS in OPV”.

Eugene A. Katz received his MSc in Materials Science (1982) and Ph.D. in solid state physics (1990) at Moscow Institute of Steel and Alloys. He is Professor of the Ben-Gurion University of the Negev. His research interests include photovoltaics based on non-traditional semiconductors (fullerenes, carbon nanotubes, conjugated polymers, perovskites), photovoltaic characterization of concentrator solar cells and solar synthesis of nanomaterials. He has published more than 90 papers in peer-reviewed research journals on these topics journals, and he has published a book and articles for broader audiences on the history of science and fullerene-like structures in nanomaterials, living organisms and architecture.

Tom Aernouts is the leader of the organic photovoltaics group at imec. He earned his Master of Science and PhD degree in Physics (in 2006) at the Catholic University of Leuven, Belgium. Firstly, he worked on organic oligomer-based diode structures, afterwards continuing his research on organic photovoltaics at imec. There, his work focused on the processing and characterization of polymer-based organic solar cells and monolithic modules, introducing techniques like screen and inkjet printing.

Elizabeth von Hauff studied Physics at the University of Alberta in Edmonton, Canada. She did an MSc in the Post Graduate Programme for Renewable Energies at the University of Oldenburg from 2000 – 2001 with specialisation in photovoltaics. Afterwards she began a PhD under the supervision of Prof. Vladimir Dyakonov on charge carrier transport in organic semiconductors, finishing in 2005. Subsequently, Elizabeth performed post doctorial research at the University of Oldenburg in the Departments of Physics and Neurobiology with the goal of developing a photosensitive chemical sensor for detecting the neural transmitter L-glutamate. In 2007 she became an assistant in the group of Prof. Jügen Parisi and supervised the group Organic Electronics, which focussed on fundamental and applied questions in polymer electronics with particular focus on photovoltaics. In 2011 Elizabeth completed her Habilitation in Experimental Physics at the University of Oldenburg. In the same year she received a joint appointment as Associated Professor between the Institute of Physics at the University of Freiburg and the Fraunhofer Institute for Solar Energy Systems. In 2013 Elizabeth relocated to Amsterdam, the Netherlands with an appointment as Associate Professor at the Vrije Universiteit Amsterdam. Her research interests are the investigation of fundamental questions in organic and hybrid solar energy material systems within the context of real applications.

Koen Vandewal received his MSc in photonics engineering from Ghent University (Belgium) in 2004 and his PhD in Physics from Hasselt University (Belgium) in 2009. Subsequently, he spent 2 years as a postdoctoral researcher in the Biomolecular and Organic Electronics group at Linkoping University (Sweden), followed by a 2 year postdoc at Stanford University (USA), investigating charge carrier generation and recombination processes in organic optoelectronic devices. Since 2014 he holds the endowed chair for Organic Photovoltaics at the Institutfür Angewandte Photophysik (IAPP) of the Technische Universität Dresden (Germany). 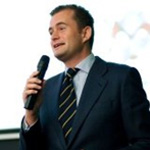 Marta Ramos began her research carrier in 1985 as a research assistant at the Minho University. She currently develops her research activity in the centre of Physics from University of Minho, with emphasis on simulation of polymeric devices for applications in energy and biosensors, materials simulation, modelling of Bionanosystems. Her main motivation is linking fundamental and applied research in the development of new material concepts and processing technologies, design of new devices, through modelling/simulation techniques, such as – first principles quantum mechanics methods, molecular dynamics, kinetic Monte-Carlo, finite element methods.